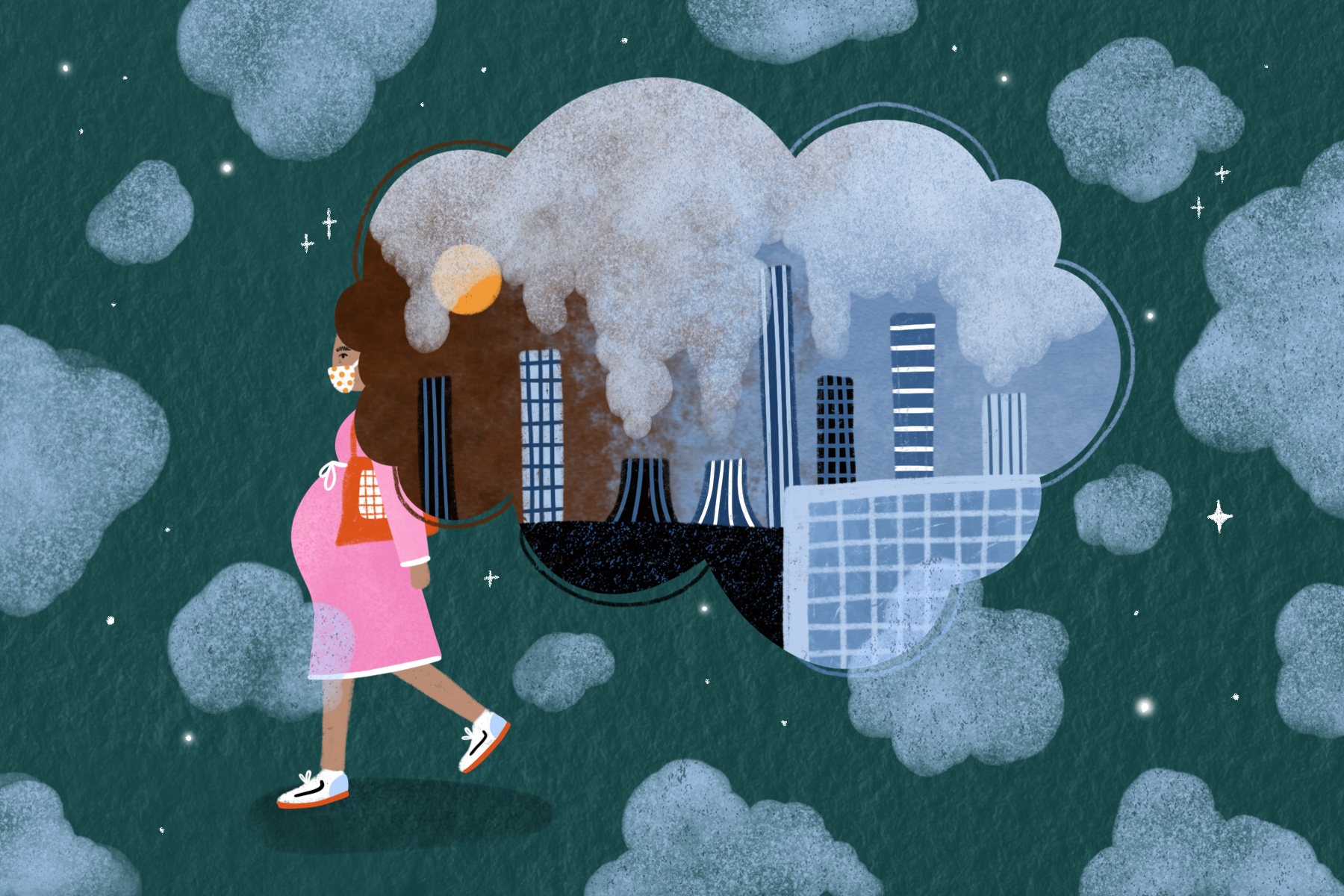 In the western United States, where massive wildfires have fouled the air with smoke and hazardous levels of pollutants, Santosh Pandipati, an obstetrician in California, counsels pregnant patients to always check air quality before they venture outside to exercise. “You need to plan your outdoor activities when the air quality is better,” he tells them.

In other parts of the country, where hurricanes and floods have displaced pregnant residents, obstetrician Nathaniel DeNicola has advised patients, including those he saw in New Orleans, to pack a preparedness kit.

In case of evacuation, “they might be away from home for a long time,” he said. DeNicola encourages people to include emergency drinking water, extra supplies of medications and a paper copy of their medical records. “If the power’s out, that’s not typically available” now that most records are electronic, he said.

As scientists study how climate change is affecting human health, pregnant people and their unborn babies are emerging as a vulnerable group.

Those who must evacuate during natural disasters are often extremely distressed and might find their pregnancy health care interrupted. “If you have to flee, how do you make sure you continue to have access to your OB/GYN or to the hospital you plan to deliver in?” said Pandipati, who has seen patients who have escaped wildfires. “If you end up needing to go live with family an hour or two hours away, you have a disruption in care.”

It doesn’t take a catastrophe to create problems. Ongoing exposure to hot temperatures and air pollution might raise the risk of adverse pregnancy outcomes, such as preterm birth and low birth weight.

Spurred by growing evidence on climate-related effects, Pandipati and DeNicola have tailored their medical advice, not to alarm people, but to prepare them. “The reality is that we need to start telling our patients right now that the climate is changing,” Pandipati said. “We need to empower patients.”

In 2016, the American College of Obstetricians and Gynecologists issued a position statement on climate change, calling it “an urgent women’s health concern and a major public health challenge.”

Amid widespread changes wrought in the environment, air pollution and heat exposure have been significantly associated with preterm birth, low birth weight and stillbirth in the United States, according to a 2020 review published in JAMA Network Open. Such exposures are becoming increasingly common, according to the paper.

DeNicola, an obstetrician at the Johns Hopkins Health System in Washington, was one of the review’s co-authors.

Exposure to high temperatures can cause dehydration. During pregnancy, dehydration can lead to the release of oxytocin, a hormone that contributes to labor contractions, he said. “The extreme heat could very well be causing an increase in that mechanism,” DeNicola said. “It’s revved up.”

If labor occurs and a baby is born before 37 weeks, it’s a preterm birth, compared with a normal pregnancy of 40 weeks. Some of these newborns may have immature organ systems and experience trouble with breathing, feeding and regulating body temperature. Long term, premature babies might develop other problems, including learning disabilities and hearing or vision problems. The more premature the baby, the more serious the health risks.

In the JAMA study, women of all races were at increased risk for poor pregnancy outcomes when exposed to heat and air pollution, but disparities emerged. Black women consistently had the highest risks of preterm birth and low birth weight, said Rupa Basu, an epidemiologist who also co-wrote the JAMA study. She is chief of the air and climate epidemiology section at the California Office of Environmental Health Hazard Assessment.

Because of historical redlining, higher-risk communities might be exposed to more pollution from sources such as freeways, she said. Residents may also dwell within “heat islands,” urban locations that have higher temperatures than outlying areas. “There’s less green space and more buildings and cement and blacktops to really absorb and retain the heat,” Basu said.

Anecdotally, Pandipati said he has seen the effects of heat waves on his patients, some of whom work in agriculture. He consults on high-risk pregnancies as a maternal and fetal medicine specialist with Obstetrix of San Jose. Some women travel to the Bay Area clinic from as far away as California’s Central Valley.

During one record-breaking heat wave before the pandemic, Pandipati noticed many ultrasounds with low levels of amniotic fluid in the womb — a situation that might require doctors to deliver a baby early. “These were moms who were saying that they don’t always have access to air conditioning, they’re often working more manually, either in agriculture or manual labor-type jobs, not always able to stay hydrated adequately,” he said. “I was starting to wonder, wow, I think this is really from the heat waves that we’re experiencing.”

“We just kept monitoring these pregnancies and then things just turned around and the fluid improved. They turned around as the heat wave dissipated,” he said. “We didn’t have to end up delivering them early.”

Air pollution, whether from urban pollutants or wildfires, has also been linked to poor pregnancy outcomes.

Wildfire pollution may have contributed to as many as 7,000 additional preterm births in California between 2007 and 2012, according to a study that Stanford researchers published in 2021. Wildfire smoke contains fine particulate matter called PM 2.5, which can enter the lungs and bloodstream to create serious health problems. The researchers hypothesized that wildfire pollution might have triggered an inflammatory response that led to preterm delivery.

There’s debate about whether human-caused climate change is producing stronger or more frequent hurricanes. But Hurricane Sandy, which struck New York and New Jersey particularly hard in 2012, offered a glimpse into how such devastating superstorms can place severe stress on pregnant people.

In a 2019 study that looked at pregnancy complications in New York after Sandy, researchers found a heightened risk of problems such as early delivery and mental illness. The latter peaked about eight months after the hurricane. In the aftermath of community disasters, post-traumatic stress disorder, depression and anxiety can develop.

“There are a number of physical stressors and psychosocial stressors that come with bracing for a natural disaster like a hurricane and an evacuation,” he said. “People posit, and I think it’s a reasonable concern, that that all prompts some kind of cascade in pregnancy that creates things like preterm contractions.”

Both obstetricians routinely talk to their patients about air and water.

“You need more hydration in pregnancy in general. A woman’s blood volume will increase roughly 50 percent during pregnancy,” DeNicola said. “That’s a lot of extra volume to maintain, so hydration’s really important anyway. I make the extra point that as the seasons get hotter, which happens more often now, you’ll need even more hydration and you need to be aware of things like preterm contractions that are prompted by extreme heat and dehydration.”

Pandipati said he warns patients to watch out for heat waves and to keep an eye on the air quality index, too.

“Ideally, 1 to 50 is good air quality. If you’re starting to get up into the 50 to 100 range, you need to start modifying your activities, doing less outdoor exercise, not as long, not as hard,” he said. “If you’re already not feeling well, you’re coughing, you already have respiratory illness, you shouldn’t be out there.”

Such illnesses include asthma, respiratory allergies and other chronic lung conditions, Pandipati said.

“By the time the AQI is 100, you need to just exercise indoors,” he said. “You need to plan your outdoor activities when the air quality is better, so usually, very early in the morning.” Air quality over 100 begins to enter the unhealthy range.

During wildfires, those who are pregnant must be especially careful about spending time outside, DeNicola said. “During covid, we all wear masks for everything, so it’s kind of redundant,” he said, “but I do mention that wearing a mask is advised and to really limit outdoor activity.”

A few pregnant patients have asked DeNicola about environmental concerns, but that small number is increasing, he said.

“I have had patients ask about where they should buy their new home because they heard that if you live near coal power plants, that could create worse air quality,” he said. “I’ve had them say similar things related to homes near a highway.”

Pandipati talks to fellow doctors about slipping climate change into the conversation naturally, for instance, while talking about outdoor exercise or staying hydrated during pregnancy. He tells doctors, “You don’t need to be an expert on climate emissions,” he said. “What you need to understand is that those emissions are leading to environmental changes that are now measurably increasing risks to the patients you care for.”

When DeNicola speaks to health-care professionals, he often mentions “a really strong natural experiment,” he said.

Researchers studied preterm birthrates before and after eight coal and oil power plants in California were retired. When the plants shuttered, pollution levels fell. In the 10 years following the closures, the rate of preterm births in the neighboring communities dropped 27 percent, a larger-than-expected reduction.

“When you knock out air pollution over a good 10-year period, the preterm birthrate dropped in a way that no other intervention can achieve,” DeNicola said. “It gives us a bit of hope.”

Doctors can start discussing climate change with pregnant patients, but in the long run, the solutions are much bigger, Pandipati said. “We need to be ensuring that we are enacting policies that stabilize or improve the environment, that really don’t neglect the science.”

“We’ve got to address the problem at the source,” he said. “That’s the real, ultimate preventive care.”