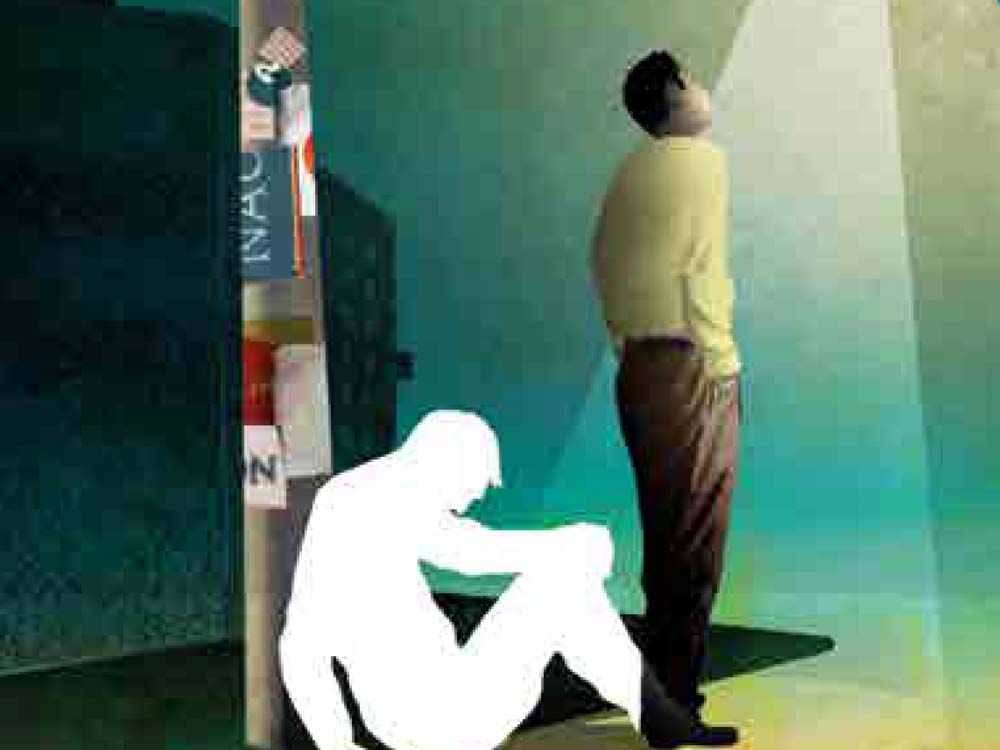 The sight of a street lamp floods Sal Schittino’s mind with anxiety. “A light post makes my heart race,” he says, “especially at night or on a side street.”

Two years ago, he slumped against a lamppost in a Baltimore alley at 4 a.m., almost dying. Schittino, a 24-year-old visitor from Ellicott City, MD, had gone out for pizza and was walking back to join friends when a teenager snatched his cellphone. Then he attacked Schittino with a knife, stabbing him in the heart, lung, abdomen, and back.

“It was very overwhelming. I was bleeding out quite heavily,” Schittino says. “Of course, I did understand that I probably wasn’t going to live. I remember wanting to grab ahold of someone or something for some comfort or a feeling of not being so alone. That was really scary — the fact that it was just me.”

He passed out. Someone in a nearby home called 911. A rescue crew rushed him to a trauma hospital, where surgeons performed open-heart surgery to save his life.

In the crime’s aftermath, Schittino, now 26, developed posttraumatic stress disorder (PTSD). The old Sal, an affable young man pursuing a career as a psychologist, felt grateful for surviving. He drew solace from family and friends. He returned to work as an assistant in a mental health hospital.

But a new Sal confounds him. He has cried for long stretches in his bedroom, screamed anxiously in the woods near his home, and struggled with nightmares and flashbacks of being stabbed brutally. His old self, he says, “cannot comprehend the level, the magnitude of the trauma that happened.”

Many view PTSD as a “wound of war,” afflicting military veterans. But PTSD also strikes civilians traumatized by violent crime, rape, kidnapping, domestic violence, severe accidents, terrorism, natural disasters, and other events that expose them to serious harm or death. Physical injury isn’t required; even a threat, like having a gun pressed to one’s body, can prompt PTSD. So can witnessing a terrifying event.

Most traumatized people adjust with time; only a minority will develop PTSD. For the latter, warning signs include great distress and disruption of life for more than a month, according to the National Center for PTSD. It estimates that 8 million people in the United States have PTSD in a given year. About 10% of women will have the disorder at some point in their lives, compared to 4% of men.

But many people don’t know that PTSD affects civilians and that treatment can aid recovery. Untreated PTSD poses serious risks, including an increased chance of suicide and abuse of alcohol or drugs to numb distress.

In some parts of the country, doctors are taking an active stance. In New Orleans, Erich Conrad, MD, an associate professor of clinical psychiatry at the Louisiana State University School of Medicine, has seen people come through the University Medical Center’s trauma unit after being injured in car or construction accidents, falling from heights, or being shot or stabbed.

Patients went home treated physically, but not mentally. “We knew that there was a tremendous amount of need that wasn’t being addressed,” Conrad says. He now directs a program to check all trauma patients for symptoms of PTSD, depression, and substance abuse. Those with symptoms are referred to mental health services.

In Oakland, CA, Mark Balabanis, PhD, a psychologist in private practice, has treated PTSD patients from all walks of life — civilians and veterans. The two groups report similar symptoms, he says, including some that stem from the body’s fight-or-flight response: feeling tense and easily startled, hypervigilance, intrusive memories, flashbacks, nightmares, and avoiding reminders of the trauma.

For Schittino, the reminders were haunting. “I just wanted to run away as far as possible from them,” he says. At first, even walking down the street was terrifying. “I was constantly looking in front of me, behind me. I wanted to see every way at all times.”

In his nightmares, “There was someone coming to attack me in some fashion and I was absolutely helpless,” he says. In his waking hours, flashbacks invaded for a few seconds. “Right before, I get this feeling of panic. The event of that night — it always goes back to me sitting by myself and then I get stabbed. I literally couldn’t see what was happening in front of me in real life.”

While it’s hard to confront one’s PTSD-related fears, avoiding triggers and memories tends to perpetuate anxiety, Balabanis says. He teaches patients that the original event was dangerous, but the memories are not harmful, even though they trip the fight-or-flight response that makes a person feel unsafe again. “We have to show them that memories will not overwhelm or injure them,” he says.

PTSD treatment takes several forms. Prolonged exposure therapy aims to desensitize patients to the trauma and things associated with it. By talking over and over with a therapist about the traumatic event, people become less fearful and learn to gain more control over their thoughts and feelings.

Sometimes, exposure therapy happens in the outside world. For example, one of Balabanis’s patients quit driving after a bad crash and couldn’t look at the type of car involved. He took her to a car lot, exposing her to the same type of vehicle until she lost her fear.

With hypervigilant patients — those who scan the environment compulsively for threats — Balabanis coaches them during neighborhood walks to stop scrutinizing people for signs of danger or conflict.

Other PTSD treatments include cognitive therapy and medications, including antidepressants. With cognitive therapy, patients learn to recognize inaccurate or negative thought patterns, for instance blaming themselves for the trauma. By challenging the distortions, they can diminish distress.

Some therapists use eye movement desensitization and reprocessing (EMDR). It’s unclear how this nontraditional psychotherapy technique works, but proponents believe that rapid eye movements help the brain to process traumatic memories and weaken their emotional power. A patient thinks about the distressing images and feelings while a therapist guides eye movements with her hand or an object.

A counselor treated Schittino with EMDR, waving a pointer to direct his eye movements. “She’d say, ‘Allow yourself to experience the feeling. Really dig deep.’ I think that it kept me from making any effort to push it down into my unconscious,” he says. “The strides that I made in such a short period were so helpful.”

Toward a New Self

Those touched by trauma know that it can strike anyone without warning, cleaving a life into before and after. Many patients integrate a traumatic experience into their lives and form a narrative, “a testimony about what they’ve gone through,” Balabanis says. “They know how difficult the world can be, but they also find within themselves great resilience. Some will even want to help other people through trauma.”

For Schittino, the trauma still catches him off-guard and the narrative is still forming. Recently at work, he checked on a patient in her room. When she didn’t respond, he looked at her face. To his horror, he realized that she had died. “That incident brought everything back to the surface,” he says. “It made me think again that I almost died and I had to deal with the fear from that. The anxiety got so overwhelming. It was like a thought of mine that I didn’t want to confront.”

The woman’s death prompted new soul-searching. “I always wanted to focus on being grateful,” he says, “for still being able to do so many things, for so many people around me who love and support me. I didn’t want to give space for questioning, ‘Why me? Why did it have to happen?’”

But being forced to grapple with those painful questions, he says, “was a relief.” Instead of suppressing the sense of unfairness and the terror of death, he is making his way toward a new self, post-trauma.

“I feel like I still have a lot to work through,” he says. But as a psychology graduate student, he hopes to help trauma survivors and those with PTSD someday.

His old self is surely gone, he says. “Once this trauma happened, this new person was not ‘me’ anymore,” he says. “I had to create new meaning for myself in life.”