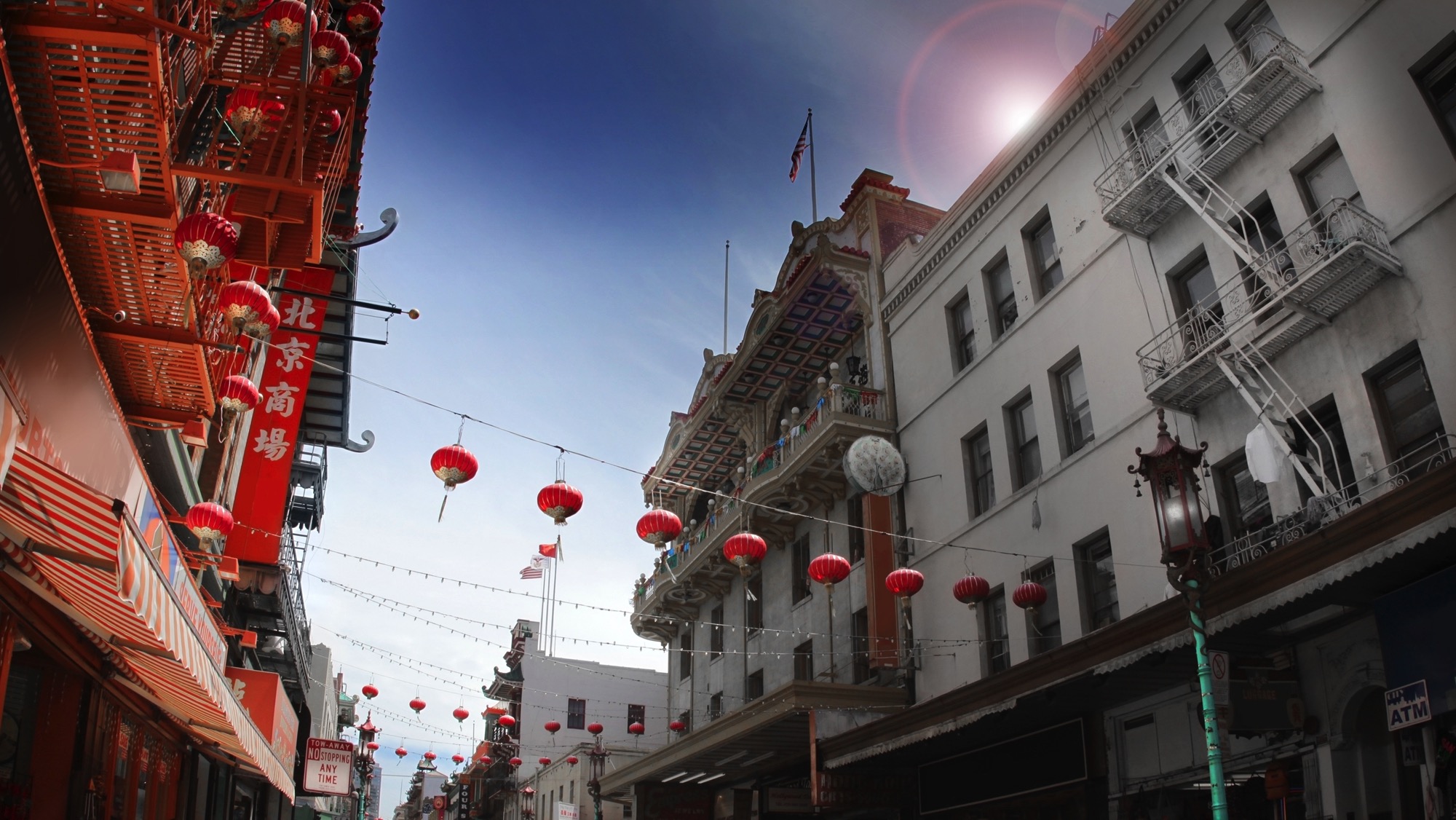 As a child, Vida Kuang would follow her mother from their cramped single room in a residential hotel in San Francisco’s Chinatown to walk through neighborhoods bejeweled with spacious Victorians. There, they imagined a life in which families of four didn’t have to pad down a hallway to jostle for room in a communal bathroom or kitchen.

“My mom was always wishing or wanting to move,” said Kuang, 24. “Her yearning got handed down to me. I was also yearning not to live in that building.”

After high school, Kuang left to study art history at the University of Chicago. But now she’s back — hoping to help her parents and younger brother move out one day, but facing long odds.

In Chinatown, an invisible world of struggle exists — not just for the Kuangs, but for hundreds of families crowded into residential hotels, commonly called single-room occupancy hotels, or SROs.

Chinatown is one of San Francisco’s poorest, densest neighborhoods, where two-thirds of residents, many of them elderly or immigrants, live in SROs. That includes an estimated 457 families with children, according to a recent census report from the SRO Families United Collaborative, five community-based groups that organize families in SRO hotels.

As the cost of housing in the city soars, more families are living in these dwellings. The SRO report found that the number of families living in Chinatown SROs has grown 14 percent since 2001.

Among the city’s SRO families, 62 percent arrived from China or Hong Kong, according to the SRO census. Only 14 percent of SRO heads of households speak fluent English.

For such newcomers, Chinatown is a gateway, thanks to its familiar language and culture, support services, and public transportation. Without English, parents can still find work in restaurants, construction, and hotels, while some labor as home health aides, janitors or child-care workers.

But the SROs, built dormitory-style to house lone Chinese laborers in the past, haven’t been as accommodating. Parents raise children for years in rooms that typically measure 8 by 10 feet, about the size of a large walk-in closet. Often, the units look like storage lockers, crammed with bunk beds, desks, dishware, clothing and other belongings that leave little space for residents to do more than sleep.

The occupants of 10 rooms per floor might share a single toilet, sink and shower, as well as a small communal kitchen.

Kuang’s family rents two small adjoining rooms for a total of $700 per month. Her parents emigrated from southern China in the late 1980s and moved into the SRO when Kuang was an infant. Over the years, the family has made do with tight quarters and no privacy.

In one of the connected rooms, Kuang’s mother and brother slept in a lower bunk bed, Kuang in the upper bed. In the other room, her father slept on the floor until they got a couch. Changing clothes required an announcement so the others could turn their backs.

“It’s so squished,” Kuang recalls her parents complaining. The children couldn’t invite classmates for dinners or sleepovers — Kuang says her mother “was always really apologetic about that.”

The couple ran a struggling Chinatown shop that sold snacks and small items. After school, Kuang and her younger brother swept the floors and worked the cash register. Without a car, the family rarely left the city.

Nowadays, immigrants such as the Kuangs will find 105 SRO buildings in Chinatown, 96 privately owned and nine owned by nonprofit organizations, according to the Chinatown Community Development Center, an affordable-housing organization. But the historic neighborhood isn’t protected from the larger forces of gentrification. SRO residents have encountered landlords trying to maneuver them out to make room for higher-paying tenants, including a trickle of white-collar professionals and students.

Traditionally, landlords have advertised vacancies by posting Chinese-language notices on the building. Now, some landlords hire professional management companies, which have taken to Craigslist to attract workers who can pay more than $1,000 for a room — significantly higher than the median Chinatown SRO rent of $700.

According to the SRO Families United Collaborative, 62 percent of the city’s SRO families have no lease, putting them at risk of displacement any time. Displaced families find few options in town. According to the SRO census report, the median rent for a one-bedroom apartment in San Francisco is $3,452 per month.

That far exceeds the household income for Ivy Gao, 40, who came from rural China six years ago and settled in Chinatown, where her husband’s relatives lived.

For $535 a month, Gao and her husband live in a poorly lit, run-down single room with their 3-year-old son, Sampson, and 4-month- old daughter, Sophia. Unable to work because of health problems, Gao stays home with the children. Her husband, a cook in a Chinatown restaurant, brings home about $1,500 per month. The SRO is all they can afford.

The room’s one small window allows for meager sunlight. Gao flips on the lighting even during the day, but its pale cast makes it hard to read or work.

Gao’s room is larger than some SRO units, but not nearly big enough to contain her little boy’s energy. Like many SRO parents, she worries that the cramped quarters will afford her children too little space to crawl and romp and develop normally. Lack of privacy and a quiet place to do homework will be issues as they grow.

All day long, Sampson unleashes boyish exuberance, running through the hallway or climbing up and down a bunk bed, oblivious to his baby sister napping on the lower bunk with a curtain drawn around her. At night, Gao sleeps with the children on this bed while her husband slumbers on the top bunk.

Other residents have embraced the boy, giving him hand-me- down clothes. While Gao welcomes the help, “there’s a lot that’s inconvenient about living in an SRO,” she said.

The SROs often lack laundry rooms. Residents wash clothes by hand and dry them on fire escapes or clotheslines that crisscross the rooftops. Gao hand-launders daily, she says, but she’s tired of hanging the wash. As a splurge, she bought a small dryer, set near a refrigerator in the room.

Gao uses a tiny communal kitchen to cook meals, such as fried rice and vegetables. Residents try to stagger cooking times, Gao says, but “on days when everyone waits to use the kitchen all at once, then you just have to wait or go out to eat.”

Another hassle: bathing. Gao cleans her infant in a plastic baby tub, but washing Sampson has been harder. The floor has only one dingy toilet, sink and shower stall — there’s no tub. Gao tried to shower Sampson, but the sprays of water scared him. Instead, she bathes him in a large pan in the room.

He uses a chamber pot, she says. “The bathroom on our floor is too dirty, so I’m reluctant to let him use it. If we had our own house, I could let him go to the bathroom without worrying.”

To escape the confines, Gao often took Sampson to playgrounds, shops and other diversions. Their most elaborate excursion: a bus ride to Costco. But with a new baby, venturing outside is harder, she says.

“Now that I have children, if there was a way to move elsewhere, I would want to,” Gao said. But the dearth of affordable housing is daunting. Many families feel trapped, languishing on housing wait lists for years.

The longer families stay, the more they are exposed to health hazards. Residential hotels are often poorly maintained and unsanitary.

In the SRO census report, 48 percent of families surveyed said SRO living had harmed their health. The most common complaints: respiratory problems; insufficient light; infections; exposure to mold, lead, rodents, bed bugs and blood in shared bathrooms; and sleep deprivation from noise in the hotel.

SRO families also miss out on many of the psychological comforts of home.

For Kuang, late evenings were a tense time. The family had to tiptoe and stay quiet. “After 10, if I dropped something or if my footsteps creaked, I had this really passive-aggressive neighbor,” she said. At 5 a.m., the woman in the unit above would drop an object. “I don’t know if it was a basketball, but it woke everyone up,” Kuang said.

“I don’t believe that any child should have to grow up in an SRO,” she said. “If SROs are bad, what do you do? Affordable housing needs to be a solution.”

With no obvious place to go, many families stay put, joining forces with Chinatown advocacy organizations that pressure landlords to keep SROs in line with housing and health codes. Gao and Kuang met while serving at one of these organizations, the Chinese Progressive Association.

Kuang’s parents hoped that her success would lift them out of the SRO. During high school, she studied under the light of a desk lamp while her mother tried to doze off. When college application deadlines loomed, Kuang used an extension cord to drag a small lamp to her top bunk. There, while her family slept, she typed away on her laptop until 2 a.m.

She earned her bachelor’s degree at the University of Chicago. “My parents instilled in me that you go to school, you get a job, and then you’ll leave the SRO,” Kuang said. “It’s always that forward thinking, like, ‘What’s the next step?’”

After graduation, Kuang came back to the SRO. She began working at a community center with Asian American girls. Her parents, now in their 60s, have pinned their hopes on her to enable them finally to move into a home of their own.

She broke the news to her mom. “We were laughing like crazy because she said, ‘By that time, I don’t know if I can move anymore.’”

Published in The San Francisco Chronicle, 2015