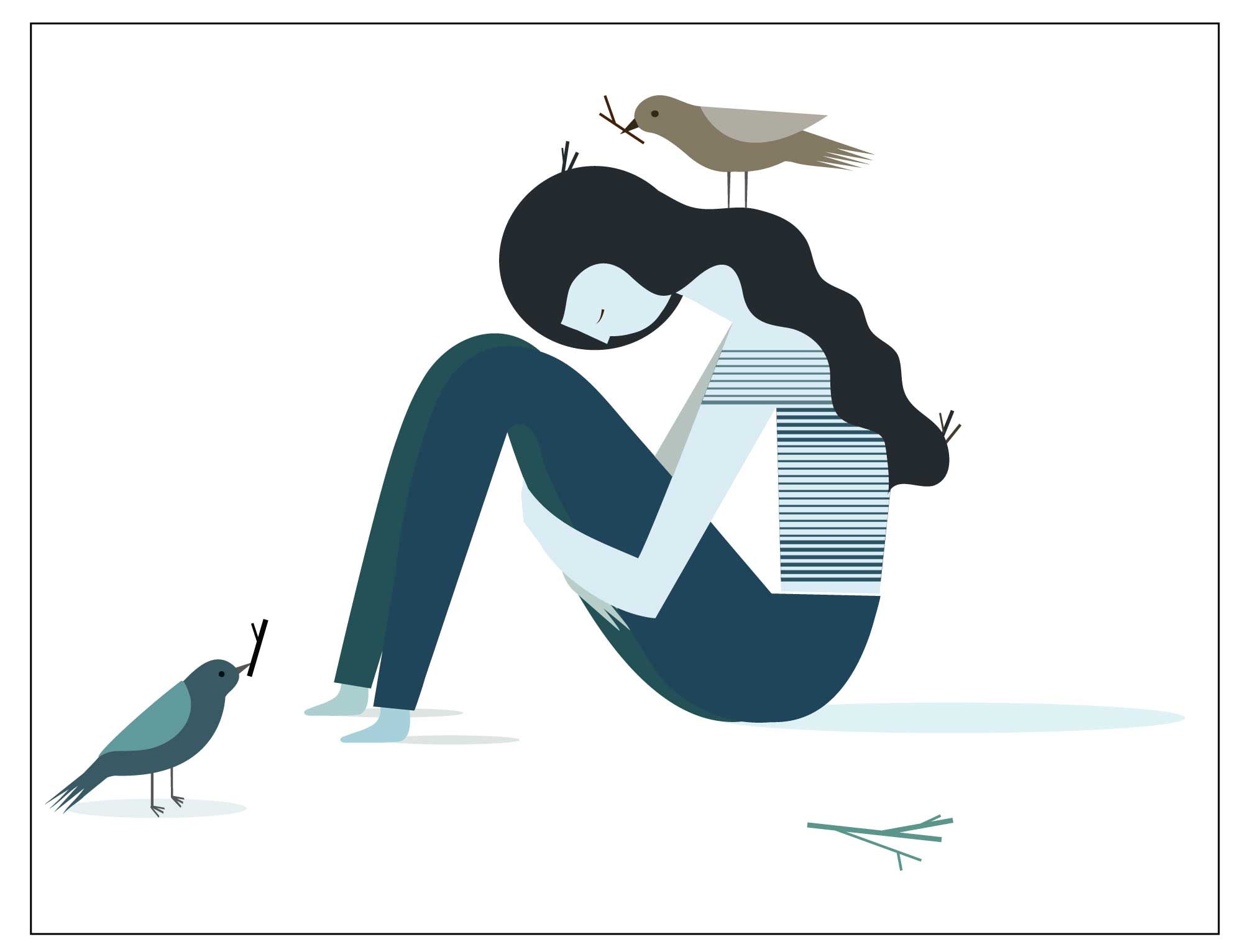 For years, Kathy KyoungAh Khang worked hard to build the kind of life many would covet. A university degree, followed by a rewarding job as a college ministries director. A marriage to a caring husband and a home filled with three lively children.

But shortly after turning 40, Khang was standing in her Chicago kitchen one day and began to weep without knowing why.

“Things had been going on for a while. It was taking too much energy to keep things together,” Khang, now 44, recalls. She realized that those feelings were not a “normal” she wanted to live with, she says. “I didn’t want to pretend anymore.”

For Khang and many Asian Americans, depression and other mental illnesses are culturally taboo subjects, laden with shame, stigma, and secrecy. Although Khang sought help, statistics show that Asian Americans are among the least likely of all racial groups to seek mental health services.

“We didn’t really have a language for even understanding what (mental health) was,” says Chu, who is Chinese American. “Families didn’t know how to speak about it, how to get treatment or help.”

In recent years, numerous mental health organizations have launched educational campaigns in hopes of breaking through the silence for Asian Americans.

And for the past 2 years, the White House has gathered government officials, mental health professionals, and community leaders to address mental illness and suicide among Asian Americans and Pacific Islanders.

In the U.S., an estimated 18.2 million people claim full or partial Asian descent, according to government figures. This group of people is diverse, ranging from fifth-generation Japanese to newcomers from India.

Estimates vary, but one recent study found Asian Americans face a 17.3% lifetime chance of getting a psychiatric disorder, including depression. Although that rate was lower than among other minorities, the study called mental health among Asian Americans a growing public health concern, given the stigma around treatment and barriers to getting it.

Asian Americans are less likely than whites to mention their mental health concerns to:

Studies of Asian American college students found that they had higher rates of depression than white students, and they showed the most distress at the time they sought counseling compared to all racial groups.

Suicide poses another hidden problem. It is the 8th leading cause of death for Asian Americans, compared to 11th for the entire U.S. population. And the suicide rate of 11.6 per 100,000 for Asian women 65 and older is more than double that of white women.

In sharing her story, Khang is defying a deep-seated belief in many Asian American communities, where all too often, mental illness is considered a weakness.

Khang’s family emigrated from South Korea when she was an infant. Her parents scrambled to adjust to life in a new country. Her depression probably began in middle school, when she first felt the weight of a heavy sadness. As a young teen, she weathered chronic headaches and stomachaches. She struggled to get out of bed and go to school.

In high school, depression split Khang’s life into a painful duality. “I was extremely high functioning and very driven, which in retrospect only made it worse. The outer expression and experience of my life was so disconnected with what was going internally — mentally and emotionally,” she says. “Internally, there was a lot of energy poured into just holding it together.”

As an adult, she described herself as “smiling, but never joyful.” When her children hit milestones, she couldn’t muster pleasure. “I realized that all of the things that I was trying to do to make what could have been just the blues or a short episode go away were not working,” she says.

At the age of 40, naming her depression finally brought relief, she says.

The Stigma of Being ‘Crazy’

Frequently, words fail to capture the distinctions within mental illnesses. In different Asian languages, mental illness is boiled down to “a problem with the heart” or “crazy,” Chu says.

Pata Suyemoto, 53, of Woburn, MA, understands the stigma. Born to a Japanese American father and a European American mother, she says that mental illness affected both sides.

As a girl, she watched her mother struggle with bipolar disorder, psychosis, and hospitalization. Crushed under the terrible strain, Suyemoto’s parents divorced. In her youth, Suyemoto took on adult responsibilities, such as cleaning the refrigerator and collecting the bills.

But no one talked honestly about her mother’s severe problems, she says. When Suyemoto was a preteen, she became depressed herself. “I had suicidal ideations when I was 12. I remember sitting at my mother’s desk and writing in my journal and looking out at the snow and wondering what it would be like to go out in the snow and die.”

At 15, she was hospitalized after her first suicide attempt. But again, her family avoided talking about the issue, she says.

Her father was mired in his own struggles: physical ailments, depression, and grievous memories of being uprooted and sent to an internment camp with other Japanese Americans during World War II.

His heritage mandated silence in order to preserve the family’s reputation, Suyemoto believes. “In Asian American cultures — in Japanese culture in particular — there’s a lot about saving face. It’s shameful to be weak.”

“Ancestry is such a big part of Asian culture,” says Cindy H. Liu, PhD. She’s the director of multicultural research at the Commonwealth Research Center in Boston and an instructor at Harvard Medical School. “If you have some sort of illness and it’s hereditary, then it’s a reflection of that family.”

Younger family members absorb this sense of stigma, she says. “Students do not come forward because when they do, it’s like they’re bringing down the entire family, and that’s a huge, huge pressure.”

Asian Americans tend to avoid mental health services for other reasons: lack of insurance or access to care, a belief that services are mismatched to their needs, or too few professionals who understand their culture or speak their language.

Instead, many try to solve problems on their own or seek help from relatives, spiritual leaders, or traditional healers. But in some cases, Chu says, doing so might delay Asian Americans with serious disorders from seeking professional help until they’re in crisis.

There’s a pressing need for culturally appropriate care, she says. “While Western psychotherapy tends to focus on the individual, for many Asian American clients, family considerations are of equal or even greater importance.”

Also, some Asian Americans prefer to mention physical symptoms as the only clues to depression, and they often prefer to visit a primary care doctor when they struggle emotionally. They might deem getting treatment within a medical setting to be less stigmatizing, Liu says.

“Their mental distress is actually experienced as headaches or diarrhea. That’s how they’re describing it.”

For Suyemoto, 25 years passed before a professional, her current counselor, raised the role of culture, she says. Before then, no one had probed her feelings of isolation and rejection as a Japanese American child growing up in Boston’s suburbs during the 1960s and ’70s, she says. Nor had anyone questioned her about her father’s internment and its enduring effects on her family.

Tailoring Their Own Treatment

After Khang’s doctor placed her on an antidepressant, “the heavy veil lifted,” she says. Laughing “feels good, because it feels like something, as opposed to the polite laughter that we make when we’re trying to stay engaged, when we really just want to just crawl back in bed.”

She also found a counselor who was Asian American, but most important, someone who understood her faith. Khang believes that treatment has revived her sense of well-being.

In contrast, Suyemoto has faced an uphill struggle.

Despite being depressed, she earned a PhD in education from the University of Pennsylvania. But “the bottom fell out for me in my late 30s,” she says. “I was finishing my dissertation, I had a full-time job, my mother was dying, I’d had a divorce, and I had a young child.” The overwhelming stress plunged her into deep depression.

Today, she describes her illness as “chronic and severe,” as well as “treatment resistant,” meaning it has not responded to multiple antidepressants. Currently, she takes a combination of drugs, which has been somewhat helpful, she says.

Eventually, she added her own cultural practices, a move that has helped provide relief, she says. She creates art, meditates to achieve calm, and uses acupuncture and herbs. “I feel that sometimes the Western medical establishment rips that from us,” she says.

Fighting the Shame of Mental Illness

Khang teaches her three teenagers that there’s no fault or shame in having a mental illness. Although it was hard at first, she began answering her children honestly as they broached the subject of her depression. Since depression might have a genetic link, she wants them to be aware of the risk.

Her work at the college ministry has opened her eyes to depression and anxiety among Asian American students, she says. Many cope in secrecy, which continues the cycle of silence.

“Whenever there’s an opportunity to be public with it, particularly in that audience, I will be,” Khang says, “because I don’t know of other places where they will hear an adult who shares their cultural as well as their faith experience to say upfront, ‘I am clinically depressed. I am on medication. If any of you want to talk about that afterwards, I would be happy to talk about that with you.’”

Suyemoto became a volunteer at Families for Depression Awareness, a nonprofit education and support organization. She also co-wrote and performed in a play called Breaking Silences, which includes vignettes about mental illness among Asian Americans. Some audience members have approached her afterward to reveal mental illness in their own families or to express gratitude, she says. “They thank me for being a voice in the silence. That means a lot to me, even though some days it feels exhausting.”

As a child, she had harbored so much misplaced guilt over her mother’s illness. “My mother would say to us, ‘You’re making me crazy.’”

Suyemoto now has a 19-year-old daughter who has witnessed her pain. “When I had depression and I had a young child, I would tell my daughter, ‘Mommy has an illness that makes her very sad, and it has nothing to do with you. You are the light of my life, and this illness means that I’m sorry that I can’t do what we want to do all the time, but you have to realize that this is not your fault.’”

Had she heard such words when she was growing up with a mentally ill mother, she says, “that would have just changed my life.”