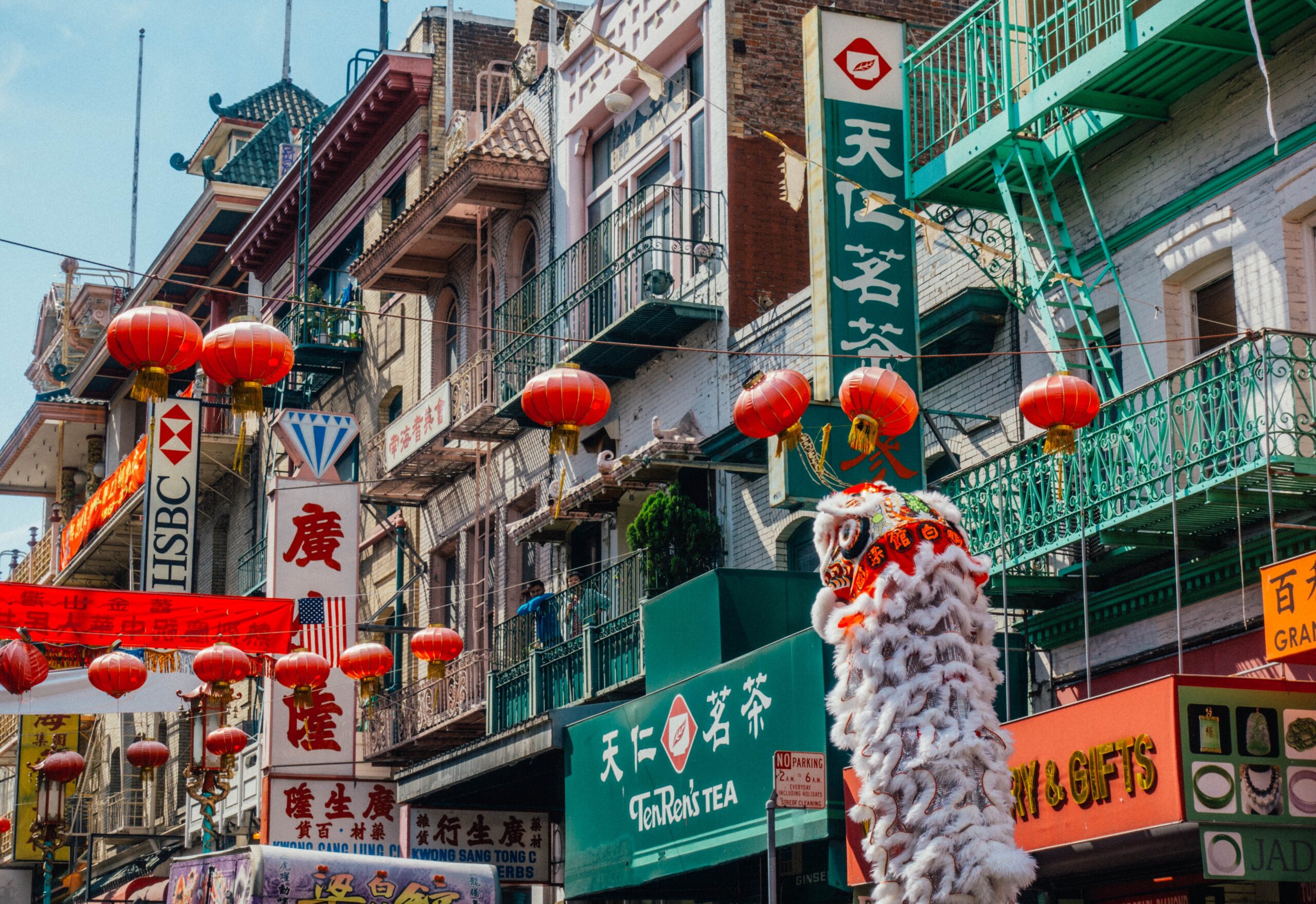 On Waverly Place, a street adorned with the most beautiful painted balconies in San Francisco’s Chinatown, I climb several flights of stairs inside the Sue Hing Benevolent Association building. I tiptoe past a second-floor “traditional music and exercise” club, where I spy no one warbling or working out, but plenty of elderly Chinese men watching Cantonese TV.

On the fourth floor, an old woman admits me into a world hidden from the street below, a place where my aunt comes to worship. I step into an authentic Taoist temple — dimly lighted, joss sticks burning — that has been operating for 149 years.

Hundreds of ornate, red-tasseled Chinese lanterns dangle from the ceiling, mingled with red cards from Chinese patrons to petition the goddess Tin How, protector of fishermen, sailors and travelers, for health and happiness. Out on the balcony, where more joss sticks waft incense into the cool air, I soak up my own private view of the Transamerica Pyramid’s apex.

That’s because I am the lone visitor to the top-floor Tin How Temple.

The throngs are all a half-block away, mobbing the souvenir shops along Grant Avenue, a street synonymous with Chinatown the world over. There, visitors can snap up silk slippers, paper parasols, Tweety Bird watches, San Francisco T-shirts, cable car replicas, back scratchers and chirping metal crickets — not to mention the ubiquitous plastic Buddha figurines, only $4.99.

For years, purists have grumbled that Grant Avenue, famous for its ornamental gate at the intersection of Bush Street, has turned into a tacky souvenir bazaar, complete with camera shops, luggage displays and McDonald’s. But the real Chinatown still exists — a living, breathing ethnic enclave of more than 20,000 residents.

The neighborhood, traditionally bordered by Broadway and California, Stockton and Kearny Streets, began as a safe haven for Chinese settlers, lured by the 1849 Gold Rush and later subjected to repressive laws, as well as discrimination and violence that made venturing beyond Chinatown dangerous. The world has changed, of course. But Chinatown was — and is — a starting place for immigrants, like my great-grandfather, who journeyed here from Guangdong Province in the 1890’s to open a sewing shop, and 100 years later, my aunt and her three daughters, who arrived from China to operate a restaurant on Pacific Avenue.

In Chinatown, daily life unfolds in the temples, alleys, side streets and meeting places. In Portsmouth Square, old men meet outdoors to pass Chinese newspapers back and forth, haranguing one another in rural village dialects about China-Taiwan politics. In Spofford Alley, neighborhood cronies congregate daily to play mah-jongg. On Stockton Street, local people along with Chinese families from all over the Bay Area come to pick up fresh Asian groceries.

On my most recent visit in August, I found Chinatown as stunningly sensual as ever. The sight of the Bay Bridge in the distance is a constant reminder of San Francisco, but the atmosphere on the streets transports: the sweet scent of roasted Peking duck, the Cantonese pop tunes blaring from music stores, the posters of red-hot movie actresses Maggie Cheung and Zhang Ziyi, the crush of the crowds.

To me, nowhere does Chinatown feel more Asian than on Stockton Street, which runs parallel to Grant. While tourists dominate Grant, the faces on Stockton are overwhelmingly Asian. The businesses include the Hop Hing Ginseng Company and the Sincere Bank, but most stores cater to the Chinese love of food: the Kowloon Market, the Luen Sing Fish Market, Louie’s Produce, and Fruit City. Many local people shop daily, browsing several stores for the freshest, cheapest offerings.

The less nimble risk being knocked off balance by a woman wearing her grandchild on her back in a meh-dai, a cloth carrier that frees both hands to lug plastic bags bulging with groceries. Chaos always hovers. At the Luen Fat Market, where fresh snails, conch and grouper are on display, an employee dumps a big net full of live fish into a tank, and the startled creatures thrash about, splashing water all over my sandals.

People-watching is half the fun. I smile when I pass a frail, snowy-haired Chinese woman whose black T-shirt reads, ”Go ahead. Make my day.” I stumble across a colorful and noisy lion dance parade in which last year’s Miss California, a Chinese-American Stanford graduate named Rita Ng, waves regally from a convertible.

Prosperity and struggle exist side by side in Chinatown. In the herbal shops, rich matrons buy bird’s nest, a $1,200-a-pound delicacy reputed to keep the complexion smooth, while outside, aged women on the sidewalk hope to earn a few dollars hawking dried bok choy or hand-knit baby booties. Many who grow up in Chinatown become upwardly mobile and move away, leaving mainly the elderly and new immigrants, who often crowd into small apartments.

This isn’t Asia, of course, but an amalgam of East and West. Along the streets, I hear the sounds of Aretha Franklin and Celine Dion mingling with Cantonese tunes from the Hong Kong pop stars Aaron Kwok and Andy Lau.

The music stores sell CD’s with titles like ”Respect for Da Chopstick Hip Hop.” The McDonald’s on Grant hangs vintage Asian photos in its dining room, while a Chinese noodle joint adopts the name New Hollywood Restaurant and Bakery, complete with a palm tree logo.

That name alone inspires me to drop into the bakery, one of scores in Chinatown where old friends gather each morning. I find a bustling noodle and pastry house where the young Chinese waitresses wear pink-and-white-striped smocks inexplicably embroidered, “North Hollywood Bakery.” They move from table to table, greeting regulars as Ah-Sook (Uncle) or Goh-Goh (Big Brother).

A waitress takes my order for chicken jook, or rice porridge, and a glass of pearl milk tea, a trendy Taiwanese drink as entrenched in Chinatown as a Starbucks latte is in the rest of America. She returns with a chilled glass of tea mixed with milk, sugar and crushed ice. At the bottom are black tapioca “pearls”– chewy and flavorless, actually — but a successful gimmick because they can be slurped through a jumbo straw (a hot pink one poked out of my drink). For the adventuresome, the tea, sometimes called bubble tea, also comes in flavors, among them: mango, honeydew, coconut and red bean.

Among the Chinese, a common greeting is, “Have you eaten yet?” Not surprisingly, dim sum — tea with dumplings and assorted delicacies in the morning or early afternoon — is an extremely popular diversion. For the uninitiated, finding a good dim sum house among Chinatown’s many choices can be dicey. The tourist traps can be dreadful, and I even found one old favorite, New Asia, surprisingly disappointing.

Its grand, Hong Kong-style atmosphere is inviting: big glistening chandeliers, an enormous sunken dining room, and larger-than-life wall hangings of ancient deities. In my family, the test of a good dim sum house is the har gow, or shrimp dumpling; New Asia’s did not pass muster.

Next time, we took advice from my aunt, who had worked in Chinatown for years, and sampled the new Y. Ben House Restaurant, which opened last December. A half-block off Stockton on Pacific Avenue, Y. Ben is off the tourist’s beaten path. Its dining room, which seats about 200, is smaller and less flashy than New Asia’s: a few jade statues, a Chinese brush painting, a golden dragon and phoenix encircling the Chinese character for “double happiness.”

Y. Ben’s dim sum, though, is wildly popular with local people. When my parents and I arrived at 10 on a Sunday morning, we faced a waiting list. In the packed dining room, I saw many three-generation Chinese families socializing, the young people learning to pour tea for the others before filling their own cups.

We were happy to sit near the kitchen door, where we would be among the first to sample the goods. Waitresses wheeled out an endless parade of carts stacked with bamboo steamers, selections starting from $1.75. Again we began with shrimp dumplings, this time, wonderful: the shrimp fresh and flavorful, the wrapper tender. A good omen. From the carts, we ordered several more dim sum varieties: bee nest taro root, shark fin dumpling, stuffed tofu, shrimp with chives dumpling, and a shrimp roll wrapped in crispy bean curd.

We finished with a fragrant, delicate mango pudding, concocted with fresh mangoes. We left supremely satisfied. “Yau peng, yau leng,” my mother murmured, perhaps the highest compliment: “Inexpensive and delicious.” When we exited, the line at the door had tripled.

Like the restaurants, some of Chinatown’s stores are also worth visiting. I love looking at the tight-fitting, high-collared cheongsam silk dresses at American Da Heng, with one shop on Washington Street and a second on Jackson. My favorite on a recent visit was a $168 sequined pink confection with a dragon embroidered down the front. At the Clarion Music Center on Sacramento Street, I admired an amazing assortment of instruments from around the world, including Chinese ones, such as the gu-zheng, a lyrical table harp, and the er-hu, a two-string fiddle. At Ten Ren Tea, a serene green shop on Grant that carries fine teas, I bought boxes of jasmine and pouchong.

Those who overexert themselves eating and shopping can take a breather in popular Portsmouth Square, where the old men gather daily to talk or play Chinese chess.

But my favorite place to do nothing is a few blocks away in Spofford Alley, which most visitors never even notice. In this unadorned lane, I listen to the loud clack-clack-clack-clack of thousands of mah-jongg tiles — a gamblers’ open-air symphony performed every afternoon. The noise bursts forth from behind the gates of the bright red Chinese Free Masons office, from within the Hakka Benevolent Association, and from numerous apartments above the storefront beauty parlors and floral shops. Dozens of spirited mah-jongg games are going on all at once. As ceiling fans stir the curtains, I catch glimpses of old men shuffling the noisy tiles around the mah-jongg tables. From open windows, snatches of animated Cantonese drift forth.

Published in The New York Times, 2001